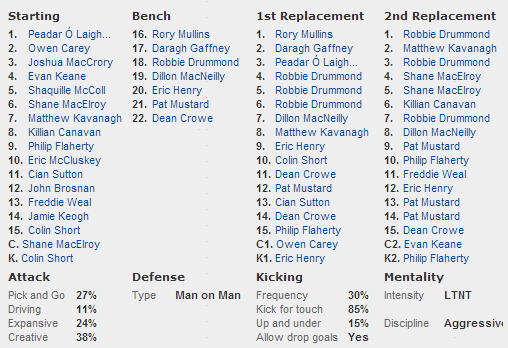 I know there is talk of the English game going on, I've read through the comments and I am considering it. For the Scottish match I have picked tactics after talking to Clampett and my own thoughts but these tactics are not final just what I think will work. I've opted to play a kicking game, making use of the conditions and using our lineout which is going to be fantastic with our massive props.
I reckon will get a couple of turnovers and even if we don't we will be forcing the Scottish backline to play it from their own half where their creative plays will be punished by handling errors given the rain. I've thrown in a small level of Up and Unders again to force handling errors. So far we have two likely ways to get the ball back from line outs, I also think we will be competitive at the rucks given the speed of our back and the aggressive tactics we will be employing.

In attack we will want to cut down on the driving plays and less PnG as the game plan is about finishing our opportunities when we get them in Scottish 22. So I have opted for alot of creative play to try and make the most of these chances. I reckon Scotland may drift as when you see their lineout they are weak in the back three and I think they might assume we will try to target this, which we will but through creative play.

Fook. This is not going to be a nice weekend. We are getting the full A sides of both Scotland and England given tonights lineup. Tonight is going to be very tough.

mouseonfire wrote:Fook. This is not going to be a nice weekend. We are getting the full A sides of both Scotland and England given tonights lineup. Tonight is going to be very tough.

told ya
with wales and Italy up next week for them what else could we expect?

for the non premiums - Ireland on the right 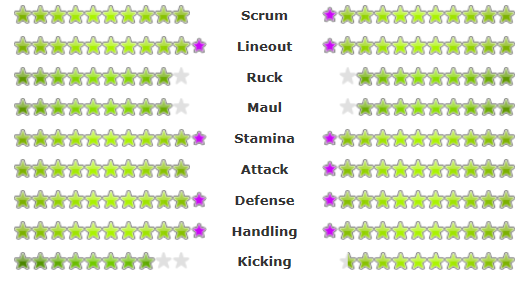 Awesome result, tactics were spot on!

aye, whatever they were

Were they not as above?

wexford1979 wrote:Were they not as above? 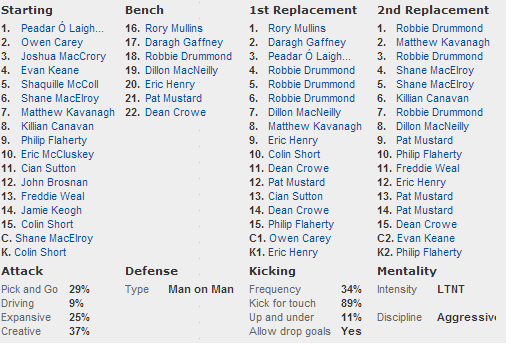 Up and Unders went down as I felt 15% was a bit excessive so I dropped 4%. Driving went down 2% and PnG and Expansive went up 1%.

For the English game. Clamps is saying high PnG and Creative and I know you were too Wex, so is that set? Do we want to play for pens or kick and play aggressive?

Did we seem to kick that much?

wexford1979 wrote:Did we seem to kick that much?

No but you won't kick outside your own half that much anyway.

You should though, the % you select is time outside your own 22! I'm not sure if the kicking is broken or something!

wexford1979 wrote:You should though, the % you select is time outside your own 22! I'm not sure if the kicking is broken or something!

Look at the territory we have in our last two games. I firmly believe it is down to kicking.

I don't think the ME is going to start kicking when you have possession inside your opponents half.

That's the thing, it should! the ME doesn't act independent and everything is based of the percentages you select! if you tell it to kick 30% of the time you have possession it is supposed to kick... this is all very interesting IMO

yep, i'm really puzzled by it, I played 38% kicking (all to touch) against cookstown and the metres kicked was 643